Submit your review about Sharon

Sharon came to us after we had problems with a new rescue dog and one of our other dogs, Sharon was so helpful and reassuring with excellent methods that really made sense. we had lots of questions to ask and she did not rush us at all and spent most of the day with us, we felt a lot more confident when she left and its nice to know she is only at the end of the phone

Ourselves and indeed Charlie got a lot out of our session with Sharon and she left us with hope of achieving the pet that we all wanted. Unfortunately we had to rehome him a few days later due to an incident with our daughter but still feel that he could have responded to the training.

Trainer note from Sharon:
Having a young, large bouncy dog in a house with a young child is always a difficult situation and sadly in this case the child didn't listen to what she was told and the result was that the owners decided that it would be better for Charlie to be rehomed, for both their daughters and his sake. It is a tough decision to make and the owners should be applauded for making the right decision before the situation got out of hand.

Charlie responded well to the training and in a calmer environment will thrive.

Fantastic. Sharon was very business like and straight to the point. She spent loads of time with us and Murphy and after 3 days we can already see a difference in Murphy in terms of barking and door control. We are enjoying working with Murphy with the training tips that Sharon has suggested and Murphy enjoys it too. We still have a way to go but progress after 3 days is amazing!

Sharon was very helpful in assisting me get to grips with our new puppy. Willow has come on leaps and bounds and we're both getting more confident as we work together .

Sharon has really made a difference .

After a number of different incidents with other dogs attacking/fighting with Nando, he became quite nervous of strange dogs when on-lead, and would bark and lunge. It was quite upsetting, and because of his large size was probably quite scary for other dog owners, too! Other than his nervousness and jumping up at visitors, I felt I was quite confident at training my own dog so I was quite embarassed to enlist the help of a professional.

From the outset Sharon was fantastic with my dog and I needn't have worried about feeling embarassed of Nando's problems. From the moment Sharon entered the house it was clear to see she had a real affinity with dogs, and Nando responded really well to her.

Immediately she was able to spot a number of things I was doing which was further re-inforcing his jumping up, and it was light-bulb moment when she explained why Nando continued to jump up.

The real results however have been with his reactivity outside of the home. Usually I couldn't have one walk without him reacting to another dog if it got too close whilst he was on the lead. After just a few weeks of using Sharon's techniques, I am finding we can go 9/10 walks without a single reaction, which I'm sure with further practise we can improve on.

Sharon also helped with a few different problems such as barking in the car, and getting bored in the house and managed to look at the problems from a new viewpoint which really helped to open my eyes!

Overall, I would (and have!!) recommended her to many of my friends with dogs.

Sharon was really attentive to mine and Willow's needs. From the 3 hours Sharon spent with us as I felt l had learnt a lot and got to understand Willow's behaviour a lot more. After my first session I felt a lot more in control of Willow and now can look forward to the future and Willows progress.

Trainer note from Sharon:
Willow is a beautiful if powerful young lady and her owner just needed some direction in how to make her into a happy family pet. Looking forward to working with both of them.

A very constructive lesson. Sharon put us at ease straight away. She gave some insure into Hattie's behaviour and how it can be managed and modified. We are seeing some early results and hope to progress. Knowing that Sharon is there when ever we need input is very reassuring.

Didn't know what to expect had no experience of trainers before. Felt at ease with Sharon straight away. She explained everything in a simple way so I could understand what she was doing with Smudge. He responded to Sharon brilliantly, she made him feel relaxed as well. Hope to continue training in 2 weeks looking forward to it.

We had a very good session. Sharon was able to see some of our and Hattie's problems. Constructive advice was given with on-going strategies to further direct and manage Hattie's behaviour. We are looking forward to a better behaved doggie down the line and can see some improvement already.

Trainer note from Sharon:
Hattie is a lovely dachshund who sometimes feels overwhelmed by what is happening around her. Her owners needed some direction in how to help her cope with situations and become more confident. 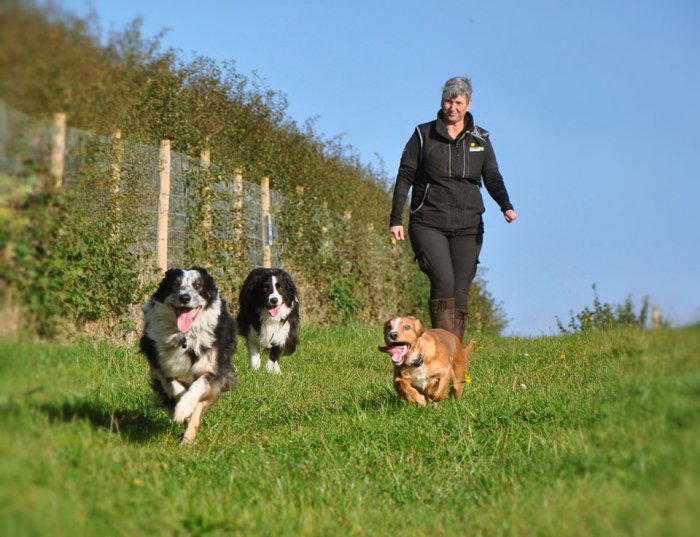