Sambo and Piglet are two Greek dogs adopted by us during our 30 year residence in Greece and brought to this country in October 2009. They are two of nine dogs, all Greek rescues we brought with us. Sambo has always beena "barket" and from an early age established his position as Alpha dog in the family. I have never been able to cure or even minimuze his barking. Piglet was rescued from a garden centre where he was kept on a 1 metre chain and lived in a rusty barrel outside in all weathers. Surrounded by excrement and filth he is a miniature poodle cross and was considered a "good guard dog" because he would bite anyone who came near him! I have not been able to cure his (now)intermittent indoor urinating against furniture. This is a long established habit and I do not know whether we can ever cure it completely, even with Tina's help. I feel more hopeful about the barking problem.

Trainer note from Tina:
A delightful pack of 9 dogs of various size and age. We actually worked with all of them for various exercises so that Sambo could see all the dogs responding. He did very well, but it will take consistent work by his owners as he had been elected the minder by the rest of the pack! Piglet's issues with toileting will not be cured overnight, but with patience and the changes recommended, he should gradually respond.

We have tried other dog trainers without success, but with Tina Edwards from Bark Busters, both our dogs responded straight away. We felt very comfortable with her and her methods.

Trainer note from Tina:
Two 4 year old Shihtzu brothers who had a little sibling rivalry, but the owners' main issue was aggression to other dogs and people making walks a real chore rather than a pleasure. I coached the owners to show the dogs how they should be behaving, getting them to focus on the person holding the lead and walk quietly next to them. Keeping their focus when meeting situations that would normally cause aggressive barking and were therefore able to redirect their behaviour in a more positive manner.

We couldn't believe how quickly Arbie responded to Tina's techniques. He is much better to walk now although after only one session, his aggresssion towards other dogs has not disappeared, it has improved and I am confident that he will continue to do so.

Trainer note from Tina:
I showed Arbie's owners how his behaviour had become a fixed habit and that by changing their own behaviour to a more positive relaxed control they were able to walk past a house where Arbie normally reacted badly to the dogs living there. My next visit will be with my own dogs to further help Arbie learn how to approach dogs in a normal doggy fashion!

We have had Max now for 6 months. He is a very well behaved dog, but very nervous. Tina is helping with his training and we can see the improvement in his behaviour. Max isn't very good with other dogs, but we are seeing improvement in the recent weeks.

Trainer note from Tina:
Max is a 6 year old Lurcher who gets very spooked at various situations. It seems he was never socialised with other dogs or has had a bad experience, as he was barking and lunging at them.
Rescue dogs often take longer to rehabilitate, but by taking my dogs to visit and going out on walks with the owners I have been able to show them techniques to help Max gain confidence in the owner's ability to protect him when spooked.

Thank you Tina and Kim. I feel in control of Leinster. I no longer feel frightened if someone comes to my door. He responded within minutes to the techniques you showed me and I can see the perfect dog he is supposed to be.

Trainer note from Tina:
This Border Collie, was a rather timid dog who took it upon himself to "guard" 24/7! He would bark madly at people walking past the garden fence and had rushed out of the house and nipped a visiting child. Mrs S was concerned that his behaviour might put her own children at risk, but when we showed her how to relieve him of his responsibilities, he seemed to heave a huge sigh of relief! His walking still needs some work and also it appeared that he had some pain in his lower back that could account for some of his behaviour.

Tina was extremely throrough and we felt much more confident after the first session.

Trainer note from Tina:
This little dog, a Springer Spaniel,had started to believe that the lady of the house belonged to him! He'd started to growl and her husband when he came near, although was happy to be taken for walks by him! If they showed affection to each other, he'd get very excited and growl and bark, especially if in the kitchen at the time!! We started work to control barking at the front door using voice and body language in a way that he could understand and once that was under control, we worked on his possessiveness of Mrs B. Very quickly he began to realise that his behaviour was not acceptable and although there is lots of practice to do, he is well on the way to being a less anxious and more happy dog.

Mr and Mrs A & G B
Ticehurst, East Sussex (Testimonial)

Honey walks a lot better on lead. Although does pull away at times to get to other dogs and sniff things. No longer wears a head harness. Her barking has improved, but still barks when people come to the door. Needs more training, but does not bark as much when on lead, now and again only when people stop to speak to her.

Trainer note from Tina:
Honey, is a protective dog and had been accidentaly given that role by her owner. During our latest session, she worked with my own dogs, and Mrs S was able to walk her past them on a loose lead without Honey pulling or trying to get to them. She is not aggressive, but just was not sure how to greet other dogs in a normal doggy way! Mrs S is also now taking more control with visitor situations to ensure that she is in charge of who can or can\'t come in!

So far we have had two sessions with Tina and have been impressed by her attention to detail and sound advice. Despite a range of challenging doggy behaviours to address, we can already, after 6 weeks hard work, see real improvements in Cassie's behaviour. We look forward to continuing advice and support and a much better relationship with our lovely Border Collie.

Trainer note from Tina:
Cassie is a young dog and like most Border Collies she needed challenges to keep her brain occupied. She had developed some obsessive behaviours like racing around a large garden in a specific direction and wanting to herd cars etc! I showed the owner how to control her around visitors so she would greet in a less "active" way, we then worked at giving her different things to do in the garden, working on 100% recall, and general obedientce short sessions to give her brain something to do! On lead we worked on getting her attention and focus on her ownerns, so she would forget about the cars and to teach her to walk calmly on a loose lead. She is a lovely girl, and is making excellent progress with owners committed to giving her the help and training she needed.

I could not believe the difference in my little dog after the first session with Tina. Tina was very understanding and patient. I can not fault Bark Busters and highly recommend them.

Trainer note from Tina:
A little rescue terrier, very cute of course, but although was good with dogs in the shelter, had become a danger to herself and her owner on lead. She had started lunging and barking, getting herself into a frenzid state. Her owner, a lovely lady had poor sight and Tippy was seeing the dogs and people before she did! I helped Mrs B to control her indoors at first, then continuing the same methods as we went for a walk. Tippy responded really well and is a great little companion to Mrs B.

Mrs I B
Hythe, Kent (Testimonial)

Trainer note from Tina:
A large, powerful, but sweet tempered girl, who was becoming a wilful teenager! I showed her owners how to get her willing obedience using voice and body language, showing and guiding her into the new way of life. She responded well to the work and enjoyed the one to one work, with her owners being coached through the session. 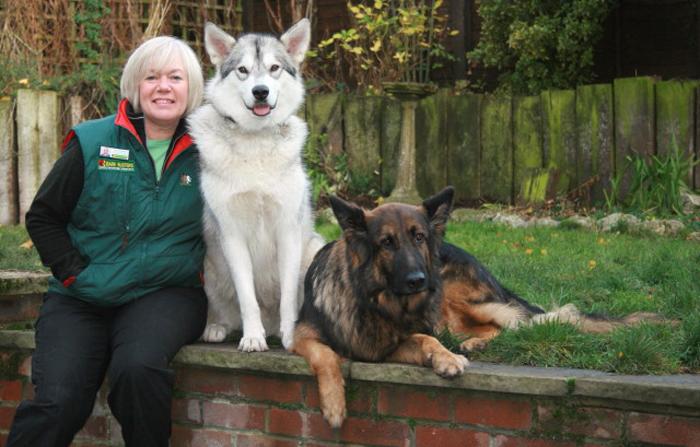