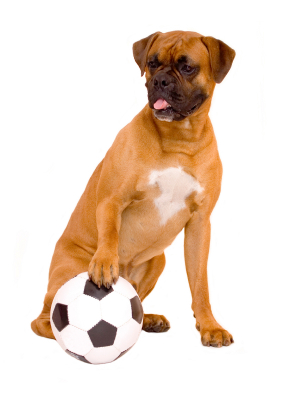 With World Cup fever spreading throughout the UK, Bark Busters advises pet owners to take special precautions for their dogs. Bark Busters, the world's large dog training company, offers helpful tips to dog owners after a spate of bites and nips during the football matches.

It's important to remember that your dog doesn't know it's a time for celebration. Nor does he know that people screaming at the TV, making a lot of noise and staggering around can be perfectly normal human behaviour during the football season. Celebrations can go off without a hitch by following these simple guidelines to ensure that your dog remains happy and stress-free over the coming weeks.

Your dog may not understand your strange behaviour. Lots of visitors, lots of drinking, lots of shouting and the occasional argument, that the gatherings can produce, may be very confusing for a dog used to a quieter life. Not to mention those of us who have chosen to blow our Vuvuzela's this season.

The shouting and waving of fists at the TV as well as the stumbling walk that accompanies a few too many drinks can frighten the friendliest of dogs. So does the strange smell and slurring voice. Be mindful if you come home late after you've been celebrating. Your dog may not realise it's you, due to your behaviour and he could lash out at you in fright.

If you're going to have a get together, send your dog to a neighbour or a friend's house for the night, or put him in an indoor crate in a bedroom away from the noise and excitement.

Be aware of what visiting children are doing with your dog. He may not want to have an England flag tied around his neck or go for a ride in the doll's pram.

Remember that many foods, including chocolate and alcohol, can be toxic to dogs. The odd one may seem ok but if all of your visitors give him one, you could have a very sick dog by the end of the day. You might be too engrossed in the game to notice that he's unwell.

By taking these precautions, you and your dog can enjoy a happy, fun-filled World Cup.